His Holiness the Dalai Lama – Part 1: My First Press Pass

I really wanted to hear the Dalai Lama give his talk earlier this month at the TD Garden, but we are trying to stay in our budget. I realized that the Tibetan Association of Boston was accepting media requests, and so I requested a press pass, and much to my surprise and delight, my request was approved!
I did not know quite what to expect. I thought the press area might be near the stage, but in the wings, and there would maybe even be a pre-talk meet and greet. With coffee and Danish perhaps. I wanted to share this experience with Susan, so we bought a ticket for her to attend also. I dressed professionally, discreetly, and carried myself as a serious person, with the proper air of dignity befitting the occasion. Cub reporter on assignment!


No One Is Without Controversy.  The first thing we notice as we pull into the parking garage on Causeway Street is a group of about fifty protestors, chanting and holding signs saying things like “Stop Lying!” I am confused and so when I reach the press area (after a lengthy tour through the back workings and TD Garden elevators) I ask my press point of contact about them. To me it seems very surprising. Who would protest the Dalai Lama? The Dalai Lama is an inherently good and benevolent being. It’s like protesting the Tooth Fairy. Haven’t they read his meditation thought of the day calendar?


The answer is that there are some who claim he is not the real Dalai Lama, and he has advised against some religious practices and this has upset some people. Not the real Dalai Lama? What pops into my mind is the movie, Santa Clause 2, when Santa (played by Tim Allen) leaves a fake robotic Santa Claus in charge of the North Pole, while he goes in search of a Mrs. Claus. Did he mean that kind of not-real Dalai Lama? It is best that I have learned not to say everything that I am thinking.


The bottom line is that no one is above controversy. If you think of the Dalai Lama as not just a kind spiritual leader of the world, but also as a religious and quasi-political leader as well, say comparable to the Pope, it becomes more comprehensible. Would people protest the Pope? Yes. Does the Pope advise Catholics on the practice of their faith? Yes. Does everyone agree with what the Pope says? No, although Pope Francis has certainly changed the tenor of the dialogue with followers, and has done more to engender openness and inclusiveness than any other Pope in recent memory.  But, certainly, he is not beyond controversy.


The Elevator.  Knowing that everyone scrambling for parking in the bowels of the parking garage at 8:30 AM on a Saturday morning and packing into the crowded elevators is here to attend the Dalai Lama’s talk, one would think that people would be a little bit more personable. We get into the elevator and greet the other occupants with a simple “good morning.” Nothing in reply. Not a one. Not a single acknowledgment of their fellow human beings. No shared human commonality. Awkward.  It’s kind of like when you see people racing on their way to yoga class, or leaving after yoga (or church, for that matter) as fast as they can afterwards. Hearing a message and living a message are two very different things.


The Ninth Level.  Members of the press are brought to the Ninth Level, which is just about eyeball-level with the jumbotron. Actually, we were so high up we were looking down on the jumbotron. I make small talk with another reporter, then we’re brought down to a lower level for a photo opportunity at the start of the talk. I’m taking photos with my cell phone. If I’d brought more elaborate photo equipment, I would have had to arrive at 5:30 in the morning. I also would have had to have purchased said equipment and learned how to use it. 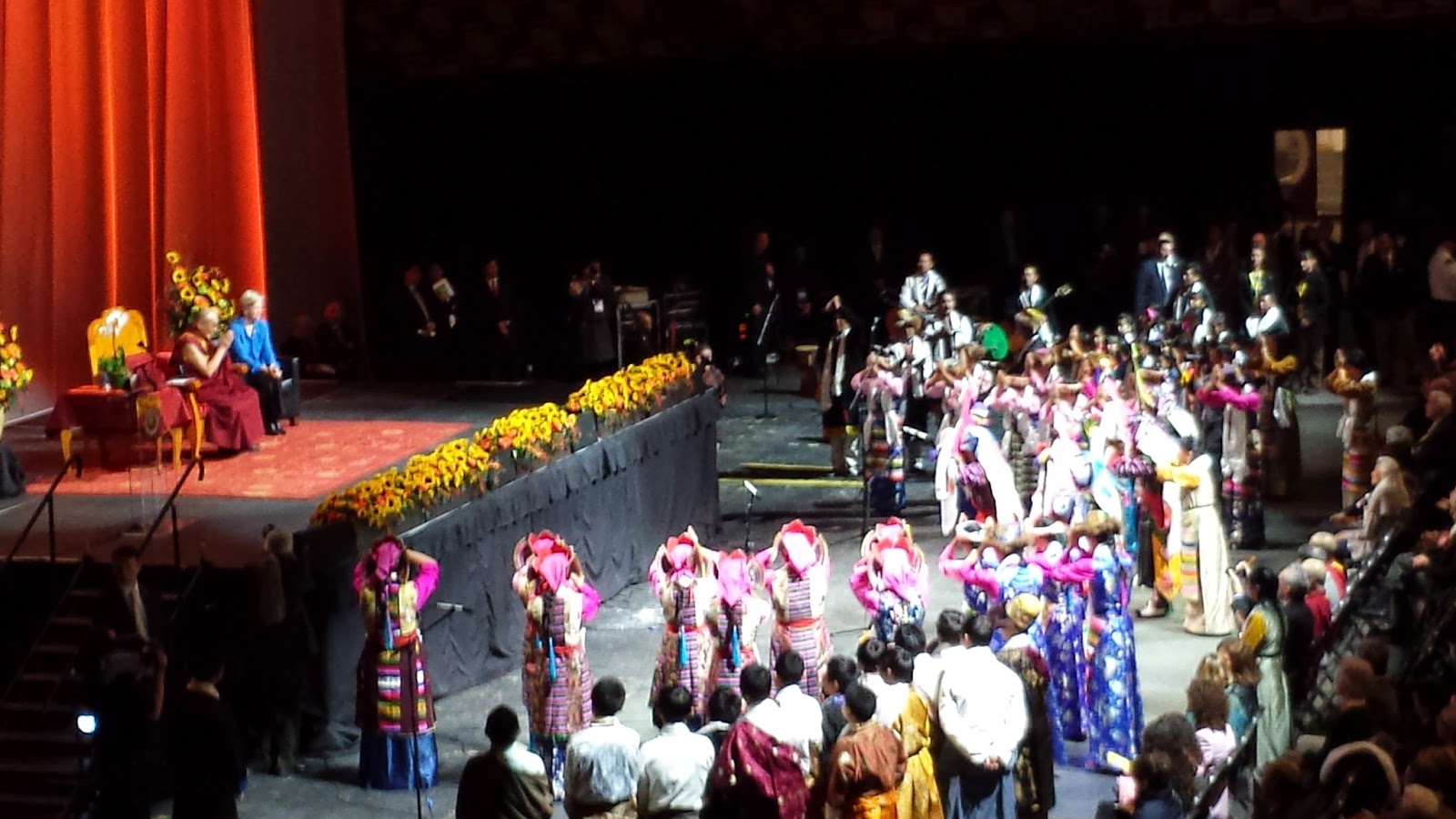 Children from the local Tibetan school perform a traditional folk dance known as “Shema.” His Holiness the Dalai Lama enters the auditorium, greeting the children, and taking a seat. Senator Elizabeth Warren gives a brief introduction. The remark from her speech that stood out in my mind:

“Compassion is not an option; it is a necessity.” 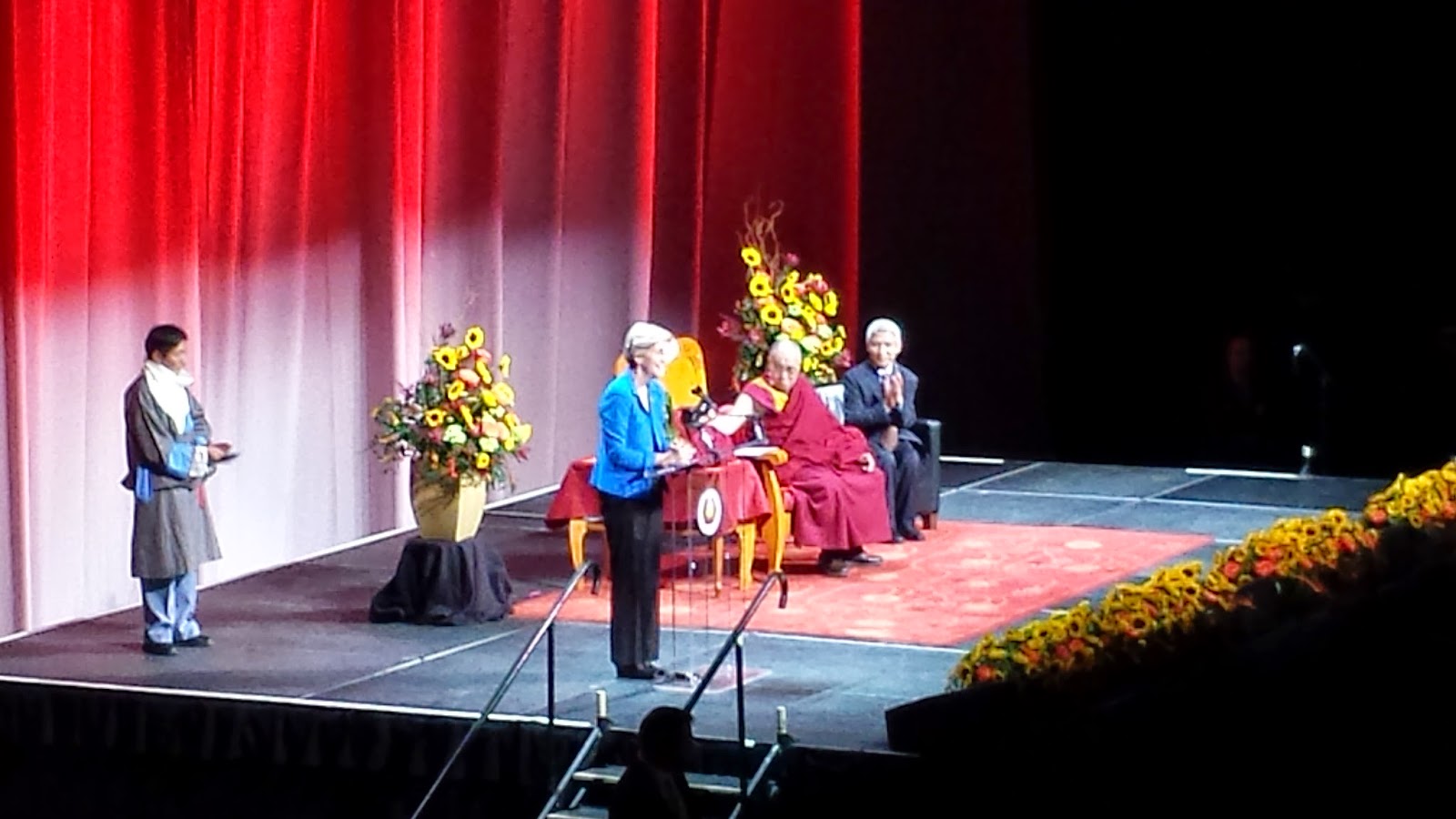 We are taken back to the ninth level, and I get situated with my notebook, to listen and watch and experience, and take notes. I’m having a hard time hearing, and so I figure I just need to try harder, and maybe get used to his slight dialect, and the acoustics. This approach (“trying harder”) worked equally well for Calculus. I wrote down what I heard, but I knew I was missing big gaps in between.


My best efforts could not overcome the acoustics. Here is a sampling of my notes:


After the talk I looked at my notes and realized - How the heck am I going to turn this into a blog? I tried interviewing Susan, and it quickly became clear that I had missed a whole lot.


There is something to be learned from everything. What I learned is that I can’t count on a press pass to put me in a good position to cover a story, and I need to speak up if I am not getting what I need.


Everything happens for a reason. If I had heard everything perfectly and clearly during the talk, I would never have gone looking for an audio recording, which I found on the Dalai Lama’s facebook page, and can now share with you, too, so you can hear for yourself what he said, in his own words and own voice:


About
This is the first of my two-part series on His Holiness the Dalai Lama’s public talk given at the TD Garden Saturday Nov. 1st.


I must confess that the extent of my Buddhist study consists of getting the Dalai Lama’s thought-of-the-day Calendar and attending a few yoga and meditation classes. Even these small things can have a profound effect. I even have a meditation downloaded on my phone from one class, so I can meditate almost anywhere.


Almost anywhere. On our first foray into the Seaport District (you know how good I am at navigating), as I was working to get the GPS guidance to come through the Bluetooth in the car, instead out came “…now breathe deeply…”  I love Ben, but at that precise moment, it just shot my stress level right through the roof. As I said, I can now meditate almost anywhere. But, not while driving and fighting with my phone’s GPS.


Coming Next:
Part 2 What His Holiness the Dalai Lama Actually Said. Coming Soon: An update on the status of women’s collegiate rugby, from one coach’s perspective.

© 2014 Rosemary A. Schmidt
Rose Schmidt is the author of “Go Forward, Support! The Rugby of Life.” If you would like to request permission to use or reprint any of the content on the site, please contact the author. Use of individual quotes with proper citation and attribution, within the limits of fair use, is permitted.
Posted by Rosebud at 1:47 PM